I’ve actually been looking forward to this day for a few days.  No baking, no whipping of anything, just anything I wanted to make.

If I really were going to “Eat What I Want” I’d be eating the teaser menu at Tongue and Cheek and having a Bloody Mary-infused vodka martini.. I’ve been having dreams about this place since March.  Honestly, I dream about the food and drinks from Tongue and Cheek all year long, but the inability to have them has only intensified it.

But alas, I’ll keep dreaming for a little while longer and settle for something home made instead. So rather than a glowing, gushing rant about how much I love their food – here’s a little taste of what a normal night of cooking at our house looks like.

We subscribe to one of those weird meal kit things – Green Chef is the one we use.  I originally signed up because I was given a gift card as a Teacher Christmas gift.  I thought we’d use the two weeks that we were gifted and then reminisce fondly about that time we were fancy people who used meal kits.  That was four months ago…

Is it the quality of food that keeps us ordering it?  Maybe, we’ve only had one instance where the recipes weren’t that great and only one squashed pepper mishap.  Perhaps it’s the variety of recipes that meet any dietary need?  Also possible, I like that there are plant-based options that appeal to me and meat-heavy options that appeal to the rest of the house.  But I’ll be honest and tell you that I wish I had a little more freedom in what recipes/meals I can pick each week.  If it were just me at home I’d live on vegan meal kits and chips and salsa, but the little folks and Ryan are good ol’ fashioned meat eating Americans.  Actually, I predict an angsty vegetarian phase of Maggie’s life coming up at any point… maybe I can sway her to my side.  So all that being said, I wish I could pick and choose from all the options in each of their menus vs just having to choose three out of seven options.  There’s usually at least one or two options that sound good, but then there’s usually one to two options from each menu that sound good.

So here’s what keeps us coming back: the convenience.  Nothing takes more than 30-35 minutes (including any and all mishaps that I have) and at the end of a long day I know exactly what we are going to have for dinner.  The servings are big enough that a two person kit makes enough food for at least Ryan, Nick and I or Ryan and I plus leftovers for my lunch. Maggie doesn’t like most things right now so she poo-poos all meal kits… she’ll nibble a little of the items if I plate it just right.  It usually ends with box mac and cheese. Fuck it.  My point is, after a long Monday where I have consoled sobbing toddlers, probably been peed on at some point and had to talk at least two children into not eating rocks.. it’s nice to come home and not think too hard about dinner.

Which brings us to tonight.  On the menu: Thai Spiced Bulgogi.

There’s an important thing to note here: I pick the meals each week.  I chose this.  I looked at all the options, saw something called Bulgogi and thought “Yeah.. we’re cultured as fuck.  Let’s eat that…”  Because that’s part of the appeal of these meal kits also: they make me feel fancy and cultured when really I’m still just your average small town lady who has to google big culinary words.  But when I see a recipe option that I can’t pronounce or has a foreign country’s name in it, you bet your ass I’m going to pick it.  I can tell you for sure that in an upcoming delivery we will be having a Korean dish, another Thai dish and something called a pistou.  I don’t know what that means but I’ll google it when the time comes. Cultured AF.

Here’s what Bulgogi means: Fire meat.  It’s a Korean-style dish made of thin, marinated slices of beef or pork – or in the case of this kit: portobello mushrooms.  Now we know.

The instructions for the meal kits are usually straight forward, but every once in a while they ask you to do something that just seems excessive.  For instance, “Scrape the gills from the mushrooms”…

No. I’m not going to do that.  Why would I do that?  Are they inedible? No, they are not.  They taste like mushroom.  I happen to love mushrooms so I’m in no way turned off by the mushroom gills.  I’m also not about to wash the mushrooms with a little brush, that’s silly.  Sure, if a mushroom looks absurdly dirty I’ll give it a little wipe but I grew up in a house where a little dirt never killed anyone.

There’s also a recurring theme of chopping nuts into smaller pieces and tonight was no exception.  I don’t know if you’ve ever tried to chop nuts into tiny pieces but, unless you break out the food processor for a small amount of nuts, it makes a mess.  It’s a pain in the ass, I cannot figure out a good way to do it without just being furious.

I’ve learned a trick though: you can just smash them with a meat hammer.  They come in a tiny little plastic bag, you can pound the crap out of them and there’s no mess.  It’s my favorite tip to share with people.. and by people I mean Ryan.  I remind him of how clever I think I am every time I use the meat hammer for something other than meat.

99% of the time the meal kits come with all the ingredients you need – minus cooking oil, salt and pepper.  Occasionally you need to add butter from your own pantry but that’s not a big deal.  Tonight, however, the recipe asked me to add 3 TBSP of tamari or soy sauce.

Wtf is tamari?!  I don’t own that! Luckily, and shockingly, we own soy sauce so it worked out fine but I was a little annoyed by Green Chef assuming I have soy sauce or tamari on hand at all times.  There’s a good chance most people at least have soy sauce in the refrigerator right now, but we have a small refrigerator so we have to be selective about what condiments get to exist in there.  We have at least four different kinds of salad dressing – we only use the Ceasar – and two bottles of the same brand of BBQ sauce… if I hadn’t recently used up our jar of vegan mayo there wouldn’t have been space for soy sauce.

I still don’t know what tamari is… I never got around to googling it.

When all the sauteing, thin slicing and smashing was finished, this meal was delicious.  I added garlic powder and cayenne pepper that were not a part of the kit (that also weren’t called for in the recipe..) because I think everything is better with garlic and cayenne.  It wasn’t quite my dream Tongue in Cheek meal but it was a decently fancy meal for a Monday night. 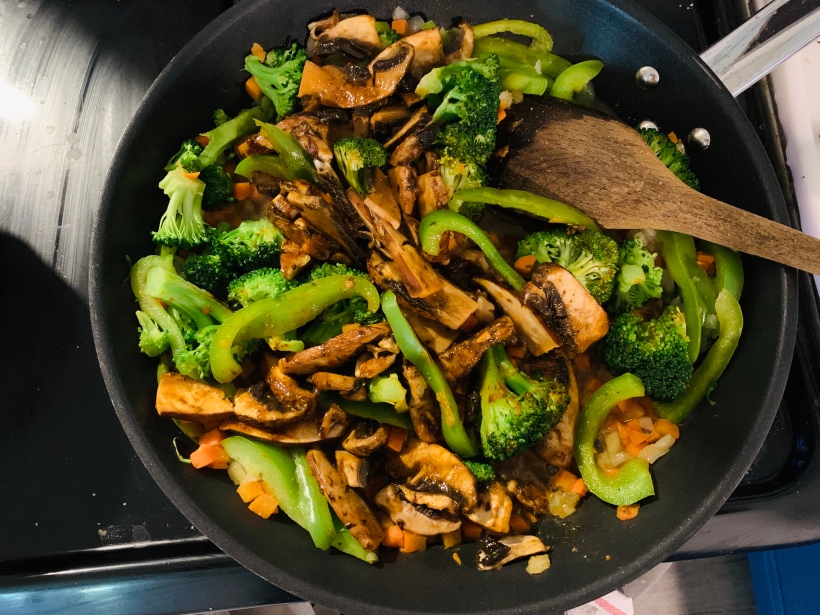 And now, please enjoy the highlights from tonight’s cooking: