*I should warn you now, I’m feeling very zen and nostalgic tonight…*

Being that today is Saturday – and also that it’s rainy and cold outside – I decided to fully commit to this day and whip up two different recipes.  I was also super pumped that it wasn’t a baking day.. I can only fail at baking so many times before I need a cooking win.

Despite the numerous videos of me failing at baking, I can actually cook.  I haven’t learned to whip stiff peaks in the last four years, but I did (slowly) become a somewhat confident cook.  In the words of Maggie “Daddy is the baker and Mommy is the chef!”

I went into the day planning to make a buttery shrimp pasta, but after (over excitedly) talking to my co-teachers about my plans for the weekend they suggested that I try a classic shrimp boil. I fucking love a shrimp boil.  It’s all of my favorite foods in one pan – corn, potatoes, sausage.. I don’t love shrimp but they look so pretty when you nestle them in a bed of other amazing ingredients.  I was sold – and that’s how I came to the grand idea of making two dinners.

I started by preparing the dough for home made pasta.

Now, I know what you’re thinking.. “Home made pasta dough?  You’ve yet to make a dough that didn’t turn out terribly?!  This isn’t going to go well…”

I’m going to tell you something shocking: I’m really fucking good at making pasta from scratch.  I cannot for the life of me figure out why or how I’m good at this, but it comes out near perfect every time.  There is nothing about my willy-nilly approach to cooking that should lend itself well to making pasta dough, but without fail – the dough comes out beautiful.  I’m not even pulling from childhood memories when I make this dough – I’ve never witnessed any of my family members make pasta from scratch.  Only once in my life have I witnessed the beauty of someone rolling out pasta dough and it was from across a street and through a window as I stood on a cobble stone street in Italy.  I think in another life I was a little old Italian grandmother; lovingly rolling out pasta dough and creating dinners from a recipe that could never be written down.  The kind of recipes that are passed down for generations, written vaguely on a notecard – that have no measurements – it’s just described in feelings and textures.  I have a deep longing to pass those kind of things down to my grandchildren some day, is that weird?  For some people a family heirloom is a necklace or a piece of furniture – for me, it’s recipes shared verbally while we work together in the kitchen.   When my children and grandchildren remember me someday, I want it first to be with tastes and smells.  When I think of my Grandma Heldberg, I think of fresh blueberry muffins and butter – warm from the oven.  I think of cranberry sauce on Thanksgiving.  That’s what I want.

So the dough was made – somewhat from a trusted Betty Crocker recipe and somewhat from sight and feel.  I added more water when the dough seemed too stiff, then a pinch more flour when it felt too sticky.  I let it rest for the length that it took me to finish the book I had been currently devouring – none of it was very precise and yet when the time came to roll it into sheets it was perfect.  Firm but not dry (dirty), malleable but not sticky (also dirty).  Perfection.

When I bought my house, I also invested in several kitchen gadgets because I was feeling like a grown up for the first time in a long time.  Among those items was the mostly useless immersion blender, a heavy cutting board that I love, and Peggy.  My Kitchenaid stand mixer.  She’s stainless steel, voluptuous and gorgeous.  There’s something about owning a Kitchenaid that makes me feel like peak adult.  Owning a home? Whatever.  Good credit? Okay.  Kitchenaid mixer?!  Fuck yeah, now I’m a grown up…

Now here’s where I need to confess something: for the first 9 months that I owned Peggy, I think I used her once? Maybe twice if I’m being generous to myself.  I was cooking nightly, but I was working 42.5 hours a week at my school then training 10 hours a week as an aerialist (plus being a mom and partner to Ryan!).  I didn’t have time to use all the cool kitchen things I impulse shopped (like a grown up!)

Enter COVID-19.  We spent the first two weeks in March in self-isolation while we waited for test results from someone we were in contact with – and in doing so, we rekindled our romance with Peggy.  We cracked open all the accessories that I bought (a year ago) including the pasta rolling attachment and the pasta extruder.  We made mountains of pasta, kneaded loaf after loaf of bread, and Ryan even made whipped cream.  A love affair was born.

Fast forward to tonight, 8 weeks later.  (If I’m being honest, it feels like a lifetime ago, but it’s only been a few months.. this is our new normal.)  After I finished my book I decided it was time to roll out the dough and start dinner.  This is another one of those times when my loosey-goosey approach to cooking should create a disaster but somehow doesn’t.  I’ve read a lot of recipes and articles about rolling out pasta dough and they all stressed the importance of having the mixer at just the right speed; feeding the dough through in just the right way; folding it X amount of times and what not…. I immediately disregarded all of what I read.  I cut my rested dough into four pieces (with my fancy bench scraper that I bought while quaratine shopping), then I fed sort of mushed it into an oval before I fed it into the pasta roller on the widest setting.  I’ve read that you should roll the dough into an oval of a specific shape before rolling it out but fuck it, just mush it.  I’ve also read that you should go through each setting on the pasta roller a few times but I ignored that… Peggy and I seem to be doing just fine skipping settings and going through the roller as we like.  We get each other, Peggy and I, we’ve got a good thing going.

This part, the pasta rolling, is essentially meditating for me.  I stand quietly next to the mixer – listening and feeling the dough to ensure it’s coming out the right texture.  I don’t think about anything else, it’s just me and Peggy against the world.  Then comes the pasta cutting attachment and it’s the same feeling – just the soft whir of the mixer and my hands guiding the dough.  It’s cathartic.  There’s a lot of noise in my daily life – toddlers, my own children, music, cooking shows on TV – tuning out over pasta dough is my version of therapy right now.

Once the pasta was cut and safely tucked out of Frazier’s reach, I started on the ingredients for the shrimp boil.  I only ordered a pound of shrimp (I didn’t anticipate my sudden need to make two recipes) so I did my best to make the right portions for each dish.  I also severely under estimated how hard it would be to cut corn cobs in half… Thank God I work out… I also (incorrectly) thought that we had plain chicken sausage in the freezer but it turned out to be apple-gouda chicken sausage…. it was fine, but Nick did mention that it tasted a little weird.  He wasn’t wrong – the flavors didn’t quite mesh like they should.  The recipe also called for Old Bay seasoning but the grocery store was completely sold out of it!  Apparently everyone is cooking southern seafood recipes in their quarantine.  I said a prayer to Kevin Belkin and used my trusty creole seasoning.  I think he would be proud.

With the shrimp boil in the oven, I got water ready for the pasta and started on the garlic butter sauce.  I’ve made enough shrimp pasta sauces in my time that I just pulled from my mind palace and kind of winged it on this one.  I went into it with the intention of making just a garlic butter sauce with shrimp and parsley but, as the cooking process went on, I decided to add some shallots, cream and Parmesan cheese.  I mostly added the shallots because we have an absurd amount of them right now….  During a recent trip to Fresh Thyme, Ryan decided that the thing we really needed in our kitchen during a pandemic was shallots.. so now I’m using them in everything.  Tonight it worked in my favor. 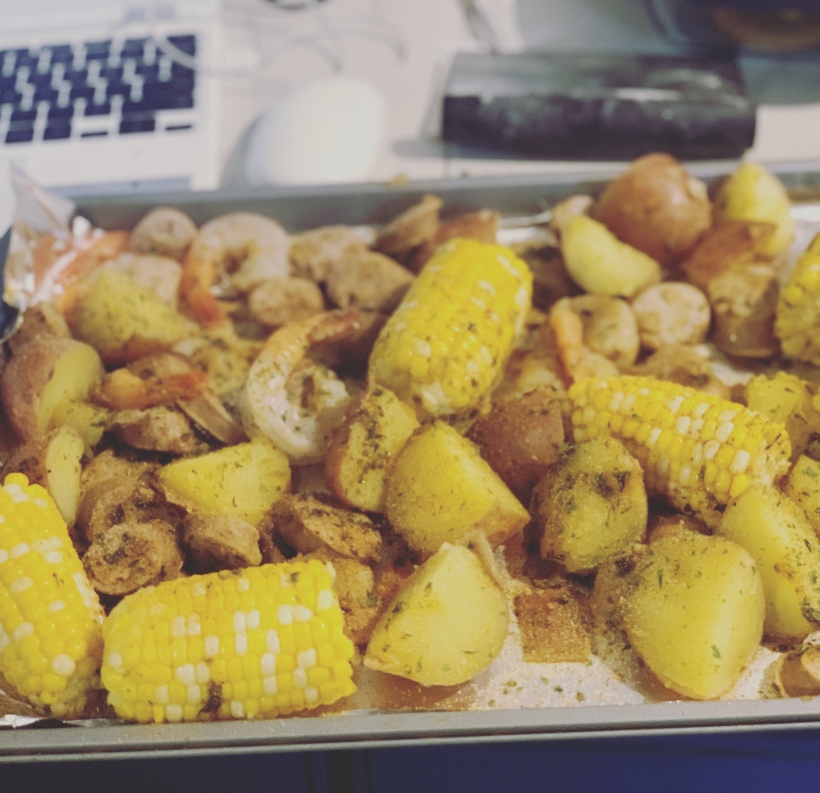 Oh! I also repurposed some leftover buttermilk biscuits (from a can) into garlic bread –  delicious.

Maggie gave the pasta a 9/10 and the garlic bread a 10/10.  Nick ate several pieces of corn and actually finished a serving of pasta!  I’ve quickly learned that at 11, Nick is rarely hungry yet is constantly growing.  It’s confusing and concerning as fuck but the Dr swears it’s normal.

Cheers to a cooking win tonight and a much needed reminder of how much joy cooking brings to my life.  In a recent episode of a BA Test Kitchen show, one of the chefs said something along the lines of “there’s no right way to combine the ingredients” and their companion chef replied “I think you just summed up the joy of cooking”.  I felt that deep in my soul tonight – the simple joy of combining ingredients, tasting, and finding that whatever you decided to throw together was just what it needed to be.

Take some chances tonight.  Trust your instincts.  Willy-nilly it a little.  Life is too short for recipes.

* favorite blooper from tonight: we have been experiencing some lighting issues in the kitchen – aka the main light just flashes like a strobe light and I can’t cook at a disco… Ryan tried to offer a temporary solution tonight, enjoy: