Today happened to fall on Black Friday – a day I typically spend shopping with my friend Ruth.  We both opted to skip it this year – mostly because Ruth had to work but also because neither of us felt like battling the crowds at the mall.

So instead, the kids and I spent some time cleaning before I got to work on the annual “Hays Day-After-Thanksgiving Turkey”!

Better known as the day I declare “I’m going to cook a turkey all by myself!” then beg Ryan to help my halfway through….

I’m a sucker for traditions – I grew up in a household that celebrated every holiday almost identically each year.  We visited the same places, decorated while playing the same records, ate the same foods… we’re tradition people.  I really want my children to grow up with the same love of traditions – with the same warm fuzzy feeling I had as a child, knowing that each holiday meant participating in something that was special to just our family.

I have been dreaming of the time when I got to make up lame and weird traditions with my kids that they will love as children, rebel against as teenagers, grudgingly go along with as young adults, then look back on fondly when they get older.  NOW IS MY TIME!

The after-thanksgiving turkey started three years ago on a whim.  It was Ryan’s idea (he will adamantly deny that but we both know it’s true.)  We were at the store together and he insisted we buy a turkey.  He REALLY wanted to attempt Alton Brown’s turkey recipe and felt pretty confident about it.  To be honest, I can’t really remember how it turned out, but it must not have been that terrible if the memory isn’t burned into my mind.

The following year (last year), spatchcocking (dirty) was all the rage, so naturally I thought it was a good idea to try it.  I didn’t really know what went into spatchcocking a turkey… I thought maybe you just cut the breast meat apart and the turkey magically lays flat…

There’s bone cracking involved and the cutting out a backbone…. as hard as I tried I was not physically or emotionally capable of cracking the damn turkey’s breast bone.  And don’t even get me started on trying to cut out the backbone… it all ended with me in tears and Ryan with his hand under the turkey’s skin saying “it’s like a skin glove!”

So this year, I was going to do it myself!  No spatchcocking (still dirty), no bone cracking, just a normal roasted turkey. 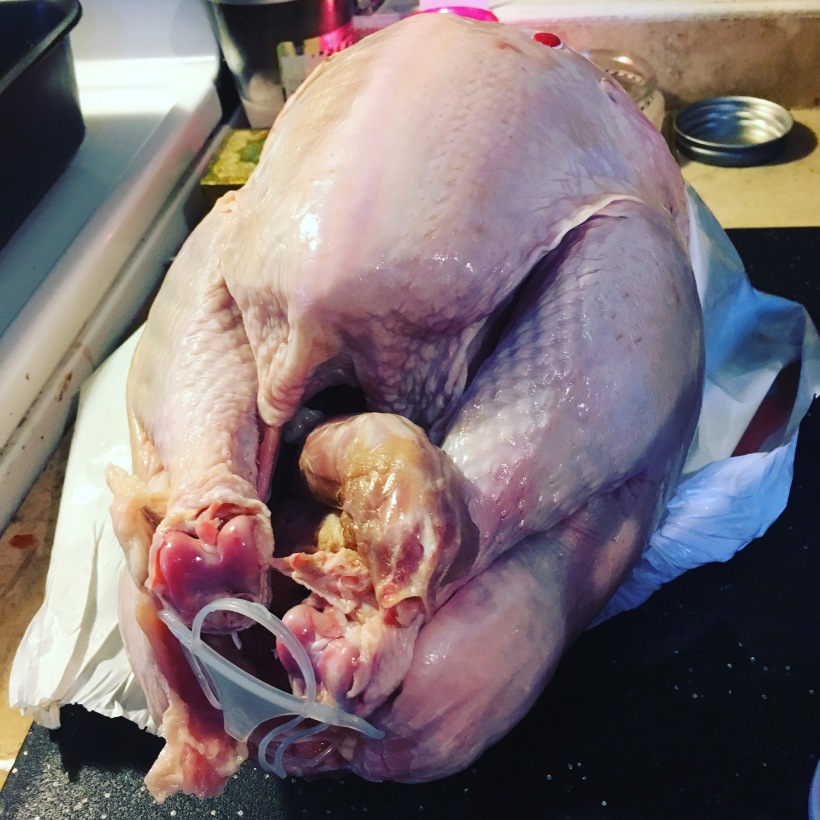 Then I unwrapped the turkey and remembered the neck-dick that someone thinks is a good idea to insert into the middle of the turkey.  It gets me every year – it’s the most disgusting and also most ridiculous looking thing I’ve ever seen and instantly turns me into a 12 year old boy.  We all know that some 19 year old guy at the turkey packaging place gets a kick out of placing the neck in just the right position so that when it’s opened, it looks like the a giant turkey penis.  Kudos, neck-dick man!

After I contained myself and removed phallic neck, I moved on to the first step of the recipe I chose (It claims to be THE BEST!): insert your hand between the skin and the meat of the turkey, separate it and stick some “butter pats” inside

It’s worded way less awkwardly in the actual recipe, but you get the idea.

Here’s where things went downhill for me.

I tried.  I really, REALLY tried to stick my hand between the skin and the meat of the turkey.  I tried REALLY HARD to stick some “butter pats” in there, but I only made it halfway through both steps…

The skin makes a weird sucking/ripping sound as you’re pulling it away from the meat – so  halfway through doing that I thought “fuck this, I’m a monster” and gave up.  Then I tried to stick some butter inside the tiny crevice I had made…

I’m not really sure what is considered a “pat” of butter, so I guessed and just cut slabs of butter from the stick.  They were approximately a tablespoon each – which is probably close enough?

Because I had half-assed the skin torture, the first butter piece only slid in 1/4 of the way – so I just shoved the second one in next to it and thought “good enough, the turkey ass will be extra moist.”

Next I started on the seasoning portion.  Half the spices in our cabinet are unlabeled, but I’m moderately good at smelling them and deciding which contains the sage and the thyme – aka the other two spices that Ryan hates!  I’m 99% sure I rubbed sage on the turkey and 75% sure I found the thyme.  It may have been rosemary. Or marjoram, I’m not sure what that smells like.

During this process, Ryan came downstairs and declared my butter shoving “terrible” and offered to help.  He also sniffed around a little and decided that I definitely used too much thyme.  Using his giant man hands, he moved the butter to where it needed to be, asked why I had used so much butter, then “helped” season the turkey.  He also helped put the celery and onion inside the carcass because I was done putting my hand inside places it wasn’t meant to be. 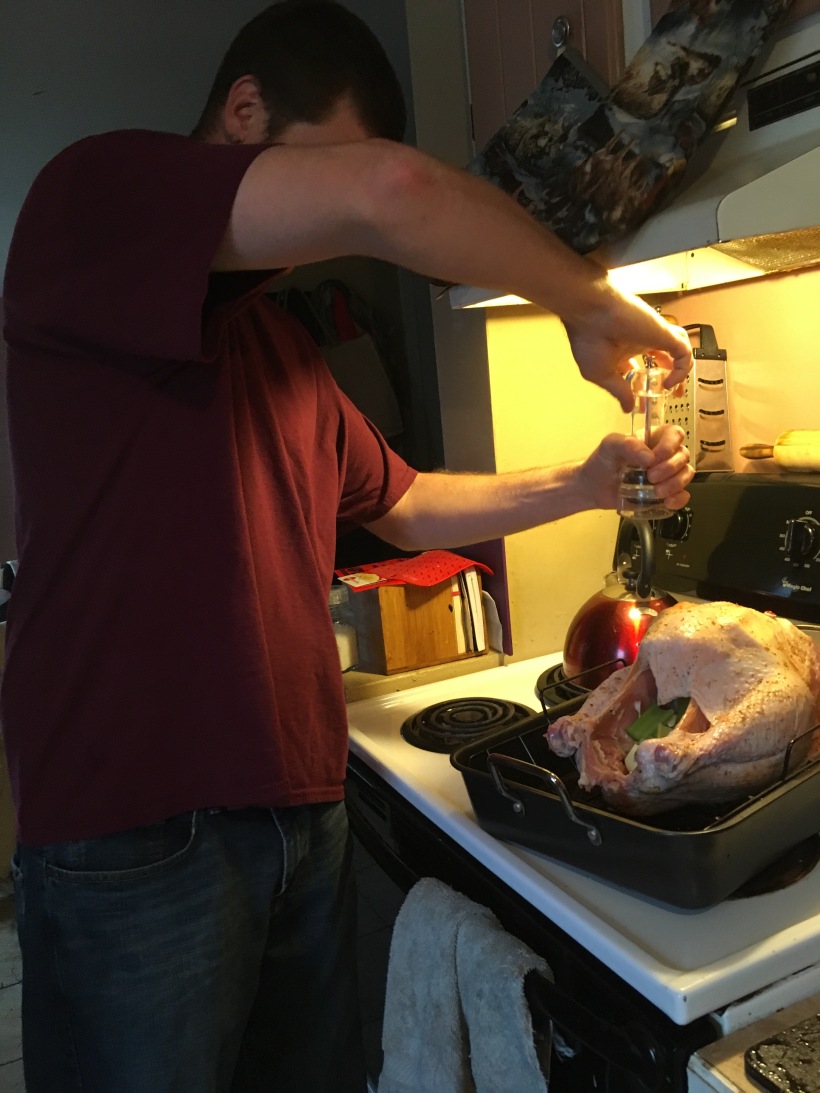 Next the recipe said to fashion a little tin foil vest for the turkey to keep the breast from burning.  I attempted this, but mostly just made a tin foil tent so Ryan stepped in and molded the shit out of the tin foil.

While the turkey cooked, I started making all the Thanksgiving sides that I had declared necessary – despite Ryan’s protests.  Aside form the turkey, I’m pretty confident in my ability to make stuffing, mashed potatoes, green bean casserole, and “honey carrots”.  They’re all fairly Gina-proof.  I even remembered to stagger the start times so that everything would finish around the time the turkey was done.  I’m learning!

The recipe definitely didn’t call for this, but Ryan kept talking about “basting” and how important it was to cooking a turkey – so after the first two hours of cooking, I rubbed a stick of butter around the outside of the turkey.  Because that’s what I thought basting meant. 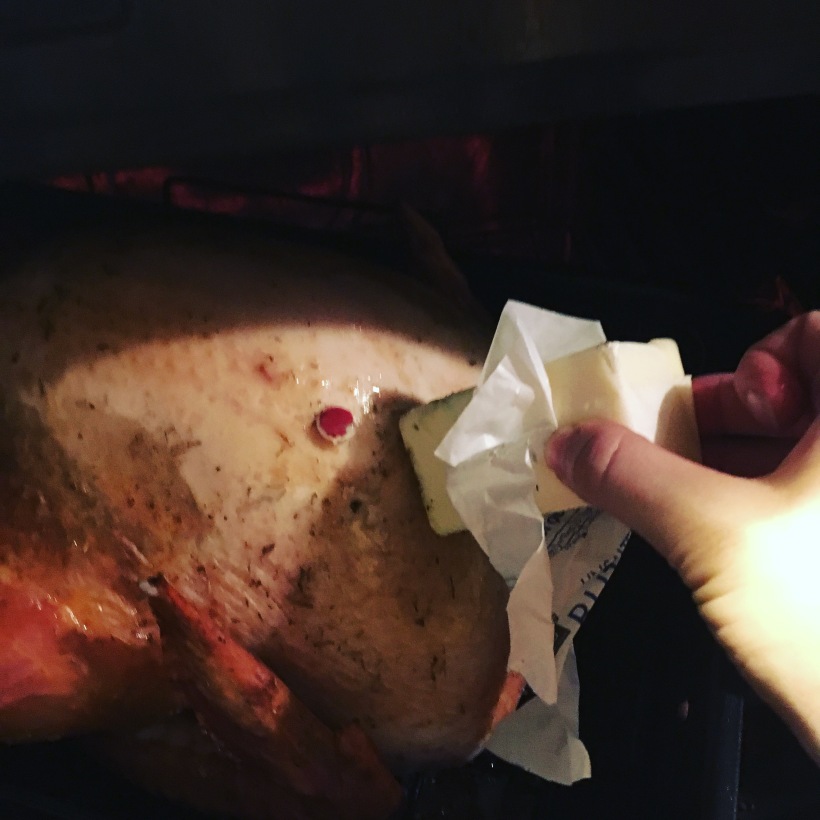 When I (proudly) told Ryan I had buttered the turkey…. he explained to me that basting *actually* meant dipping a brush in the turkey juice and rubbing it on the outside of the turkey…. so he took care of that part.

Another hour or so later, everything was done!  Ryan likes the skin “crispy” on everything – so I set the oven to “broil” for the last 5 minutes of cooking time.  In my head, I thought the turkey would get beautifully golden brown and he would be so impressed by my turkey cooking skills.

It got a little extra crispy…..

Despite that, the whole family loved it!  Nick ate 3 platefuls of everything and Ryan even said, “it’s pretty good, you should feel good about this”.

For everyone who enjoys the weird shit that Ryan says at the table, here’s some special thoughts Ryan had last week – they didn’t fall on a particular food holiday, but enjoy anyway!

I’m not sure how this conversation started – we had already finished eating and the kids had left the table – for some reason, Ryan and I were talking about pizza rolls:

Ryan: …And when they’re hot out of the oven you put cinnamon and sugar on them.

Me: That sounds disgusting.

Ryan: You don’t even know.  These were the good pizza rolls – like pre-89 ones that weren’t shit.  You probably never had those good ones.  You know how some things shouldn’t go together but they do?

Me: So Doritos with french onion dip is trashy… but pizza rolls with cinnamon and sugar are fancy? That doesn’t even make sense!

Ryan: White trash Doritos sounds fucked up, that’s gross.  These were pre-89 pizza rolls, the good ones.  When were pizza rolls even invented?  I swear something happened to them after the 80s and they’re shitty now. Wikipedia that shit.

So, naturally, I did.

According to Wikipedia: pizza rolls were invented in the 1968 by Jeno Paulucci (or possibly 1951, Wikipedia can’t deicide)  but were sold to Pillsbury in 1985 then rebranded as ‘Totino’s’ in 1993.  Which led to Ryan feeling like the king of the world.

There’s a pretty good chance we both have some fucked up food ideas…..

One thought on “Neck-Dicks and White Trash Doritos”