Someday, maybe, I will master the art of writing more frequently!

Perhaps after this post, my writing lapses will make more sense. Or I’ll just seem like a crazy person… either way, it’ll be fun.

Before I get to the shitty looking baklava that I made tonight, I need to fill the world in on the downward spiral of last week. By world, I mean the 12 people who read this – most of whom are related to me. (Thanks mom, Ryan’s mom and his sister!!!)

It all started with a sprained ankle.

Being that I work with very young children, I spend a lot of my time acting like a giant child during the day. I run like an idiot (arms flailing), I do headstands, roll on the ground – you name it, I do it for the enjoyment of toddlers. I’m like a bad one-woman PBS kids show! While running around with the children, I leapt – like a graceful gazelle – over a small tunnel. I’ve done this a thousand times. I’ve done weirder thins less gracefully a thousand times. This time did not go well…

But, like any crazy person, I iced it and hobbled through the rest of the work day saying “I’m fine, it’s fine,” in a high pitched crazy voice. 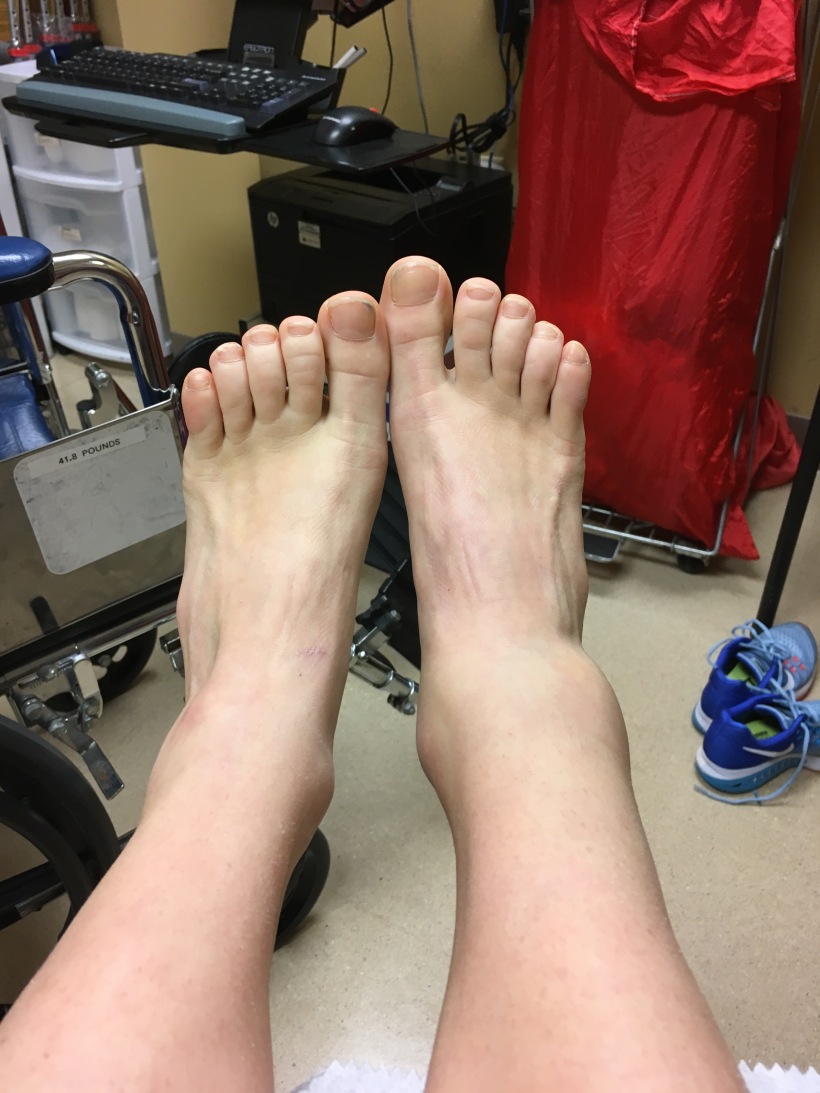 The next morning, when I could barely get out of bed, I made a trip to urgent care. This turned out to be one of those dr visits that must have been a sign from God. Actually, the ankle sprain may have been Gods way of saying “there’s something wrong with you…”

God is probably less bitchy than that sounded… right?

Anyway, while getting my ankle checked out, the urgent care dr said the following things to me:

“Huh, there’s a lump on your thyroid. Did you know that?”

To which I thought:

NO?! Why would I know that?! What do you mean?! Why are you saying that so casually sir?! What the fuck is wrong with you?!??!? Are you sure it’s not just my collarbone?!?!

The dr was kind enough to help me feel the lump – it really didn’t take much effort, you can almost see it. He then casually went about setting up an ultrasound for that afternoon, wrapped my ankle and sent me – slowly because I was on crutches – down to the lab to have my TsH levels checked.

Thyroid blood tests are nothing new to me – I was diagnosed with Hyperthyroidism this year and have become intimately familiar with all things thyroid. My dr and I worked out some dietary changes and lifestyle changes to help me manage it and, though not all my symptoms had disappeared, I thought I was doing fine. My TsH levels had normalized. Actually, that’s about the only symptom that went away…

A few days after urgent care, I got a little bit of mixed news from the dr. The tests came back, still normal TsH levels. The ultrasound though, shows the lump is not fluid filled. It’s cellular. It looks like a six week old fetus attached to my thyroid. My thyroid is growing a little buddy for itself that may or may not be caused by one of two things: Hashimotos Thyroiditis or Thyroid Carcinoma. Fucking thyroid cancer.

Enter Gina panic attack time. Only on the inside though, because I am a fucked up person and don’t allow myself to freak out in front of people.

In hindsight, I should have known something was going on. But the symptoms that go along with thyroid issues can all pretty much be chalked up to being a bitchy human being. I assumed I was just a crotchety bitch with too much energy. And that I was getting old.

Here’s some of what I have been feeling and how I rationalized it:

EXTREME fatigue: well, i haven’t slept a full night in a while. Of course I’m fucking exhausted.

Mood swings: don’t tell me how to feel bitch! I’ll cry spontaneously then shout “you’re the trump of this household!” if I want to!

Followed weeks later by diarrhea: just cleaning out the pipes!

Nausea: you mean everyone doesn’t want to vomit for no reason sometimes?

SUPER energetic and jittery sometimes: just part of my awesomeness!

Forgetfulness/foggy brain: just another cute quirk of mine!

Constantly, CONSTANTLY sweating: I’m a sweaty person. Some people are sweaty. I sweat like a delicate, damp flower so shut up.

Those are the big, most annoying ones, but add headaches, my heart beating oddly fast and hair loss to the list as well.

So, now I’m just waiting for an endocrinologist consultation and a biopsy.

Juuuuust fucking waiting. Juuuuust living with these symptoms AND the knowledge that surgery could be in my future, more dietary changes, and the possibility of having my thyroid removed.

Meanwhile, in the midst of me having an inner breakdown, we received some news at work that was life changing.

A little girl from our school, 3 years old, passed away over the weekend. Suddenly. Without warning. What the fuck universe.

As parents and as teachers, this hit us all like a cannonball to the stomach. We work in an environment that acts as one big family. We spend more time with these children than our own sometimes, and suddenly we had lost someone. We lost a light in our world. No one at work was prepared to deal with this, or to help the children deal with this, or be the best support for the family. We all just grieved together. We still are. 50% of us are holding us up while the other 50% breaks down. As a school and community, we are wrapping each other in love and comfort, we are surrounding the family with as much love as we can, but boy – it’s hard to laugh right now. As parents, we often want to fix things – make everything okay again – and we can’t fix this. Only time and love can help – it took me until today to say that.

I spent the week sobbing at home, then going to work and holding my friends and coteachers who needed strength. Then going home and cursing at the world because really?! Come on 2016, haven’t we had enough?! Do we really need to test our strength and resilience some more, God?!

After a week of feeling like I was walking through cornstarch and water (that goop from science class that’s both a solid and liquid. Nerds know what I mean.) – it was time to put my big girl pants on and go back to life. Some retail therapy at the mall with friends and my kids helped too. 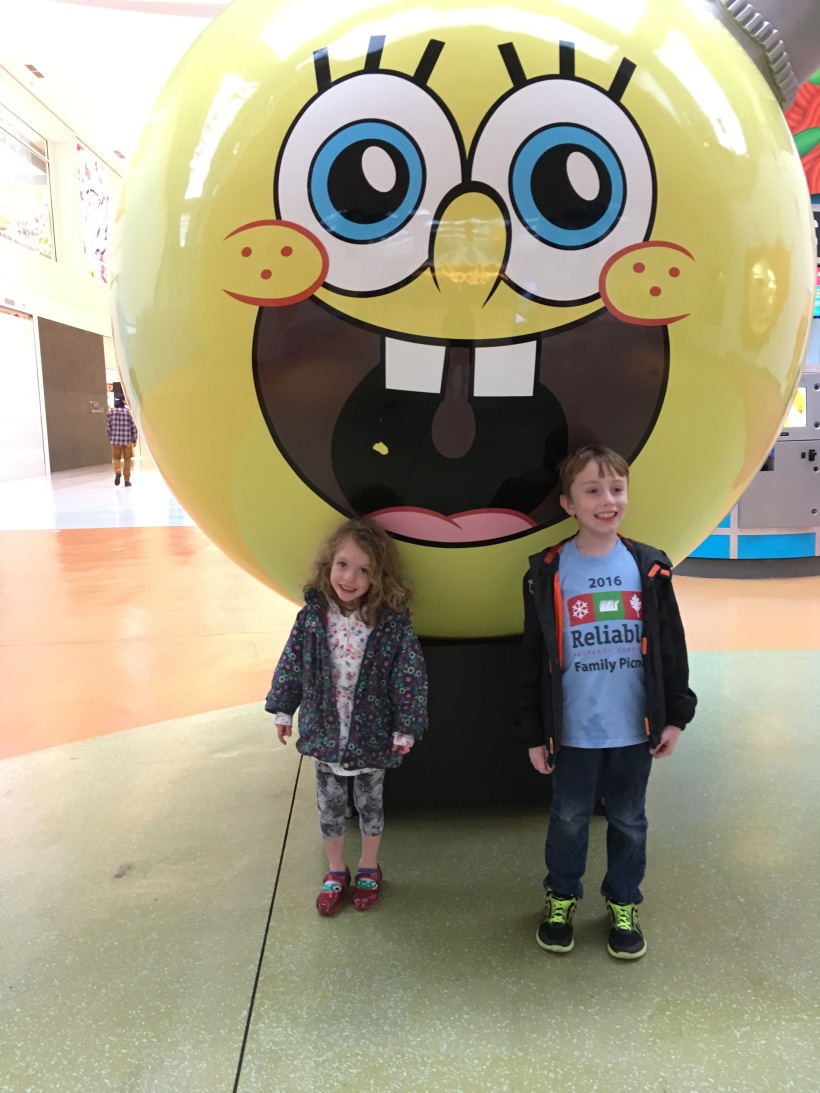 After a week of quietly celebrating food holidays but finding no joy in them, it was time for some Baklava baking.

I needed this fucked up baklava.

I chose a recipe from Food, Folks and Fun because that’s the most encouraging blog name I could find. Fun is in the fucking title, and I needed a little fun.

I thought I had all the ingredients for this recipe but, like always, I was missing one vital ingredient: honey. Baklava calls for making a sugar syrup on the stove using waster, sugar, honey, lemon juice and zest, whole cloves and a cinnamon stick.

I had whole fucking cloves hiding in the spice cabinet but no honey! I can’t even explain it. Why do I even own cloves?! What was I going to make that called for these?! They were unopened!!!

Anyway… I dug a little farther in the cabinet and found an unopened jar of brown rice syrup which, when I added it to the pot without tasting it, looked a little like honey.

Why do I have an unopened jar of brown rice syrup? Because I’m Z crazy person who shouldn’t be allowed in Whole Foods unattended.

Next I made the nut mix for the filling. The recipe called for “blanched almonds and walnuts”. 8 oz of each.

I don’t know what a blanched almond is and I only had 2.5 oz of almonds and walnuts so….. 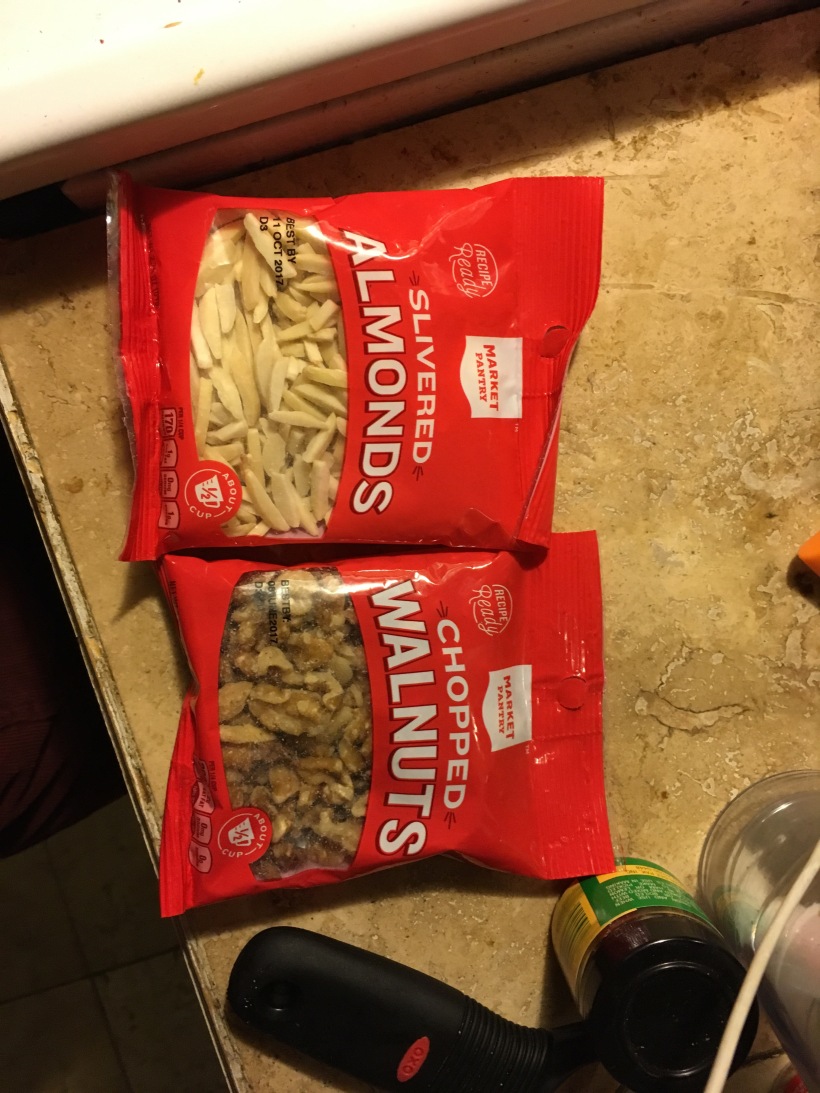 It also suggested I use a food processor to grind them up.

When I put the nuts in a bowl… it didn’t look like enough, so I added some meat-hammered pecans. Because pecans are the shit and I do what I want! Also, Ryan wasn’t home to remind me to stick to the recipe…

Next I added ground cloves (because I own that too?), sugar and cinnamon to the nut mix. I could have sworn I had normal cinnamon in the cabinet… but in the moment I could only find the weird jar of “extra fancy” cinnamon.

So this baklava was about to be fancy as fuck!

Next came assembly. The recipe called for phyllo dough. When I went to Target over the weekend I could only find puff pastry. I don’t know if that’s the same thing or not. I could have asked a nice Target employee to point me in the direction of the phyllo dough, but then they would have caught on to the fact that I have no idea what  doing!

The picture on the box looked a little like what I imagine baklava looks like…. so that seemed encouraging.

At this point, Nicks step mom came by to pick him up. I love her very much – but she’s definitely better at some mom things than I am. I’m like the fun mom who does weird shit like make baklava incorrectly on a Friday night… she’s the cool step mom who knows HOW to make baklava AND probably has honey in the cabinet. She’s the yin to my yang. I asked her if I was doing this right… she laughed then very sweetly said ” it’s pretty hard to screw up, it’ll be fine.”

Since I probably had the wrong dough AND it was still partially frozen… I disregarded the baking time the recipe suggested and just eyeballed it. I baked it at 300degrees (per the recipe) for 30 minutes (per the puff pastry box), checked it, added the sugar syrup, then put it back in for another 20 minutes. When the kitchen started to actually smell good, I checked again and deemed it finished.

It seriously looked so depressing and sad… but when I put it on s plate and tasted it…. it was delicious! I can’t explain how it happened!! 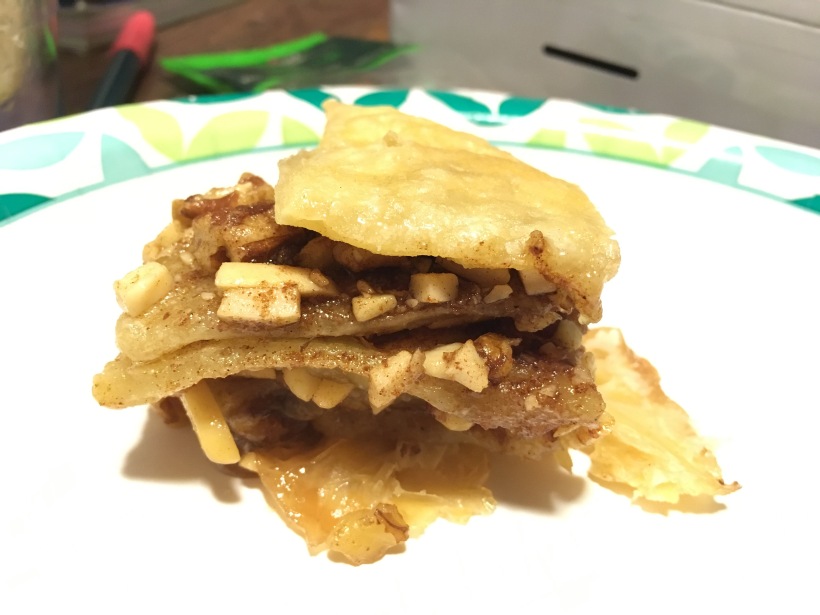 Maybe the universe knew I needed a win this week, maybe baklava really is hard to screw up, either way. I’m eating this for breakfast for the whole weekend!

Here’s the lesson in this week: hug a little tighter, love a little more, let go of little things, and don’t assume you’re just a crazy bitch. Get that checked.

One thought on “Grief, Lumps and Baklava”