Or what shall now be forever known as “The day the toddlers made penis popsicles!”at work…

Here’s how the day began:

My co-teacher Nicole has been busting her ass this week making strawberry-banana yogurt popsicles with our children… for the entire school.  160 “rocket” shaped popsicles.

Sounds amazing, right? What an awesome treat for everyone to enjoy on Friday afternoon, right?

Tuesday afternoon, as Nicole was removing one of the popsicles from it’s mold to see how they turned out, a horrible discovery was made.

Little flesh colored, supposedly rocket shaped penises that look a little like they have herpes….

At this point though, we were committed to the damn popsicles! Nicole had just made 40 of the suckers (yep, I made that joke.) and the children were expecting popsicles on Friday!

The day of the popsicles.  Hours of Nicole’s life spent carefully crafting these dick-sicles.  We had to eat them.

Now imagine a room full of two year olds eating these.  It made an extremely long week just a little bit funnier.

At home, Mag and I whipped up some white chocolate chip cookies to celebrate the day.  After SO MANY dick jokes, I needed something wholesome like baking cookies with my daughter to balance out the scales.  I’m definitely back on God’s good side, right?!

Using a recipe from Cookies and Cups that claimed to be THE BEST white chocolate chip cookies, I had high hopes.

Since making the apple dumplings, Maggie has been extra interested in helping in the kitchen.  If nothing else comes from this project, I’m enjoying sharing this experience with my kids.  My brother and I were always under foot in my moms kitchen while she baked – she made cakes for a living when we were little, I should be AWESOME at baking!  I didn’t really learn anything about actual cooking in my moms kitchen, not because she didn’t want to teach us – she did – but my eyes were focused on the batter in the bowl, the GIANT tub of frosting, the cooling rack of cookies.  My mom tells a story about baking cookies in which every time she turned her back to open the oven, Tim or I stole an unbaked dough ball from the tray that was about to go in.  We were food motivated little buggers.  What I did learn in her kitchen was that love is always the secret ingredient and that sometimes having a good time matters more than how things taste.

That last little bit isn’t 100% true, everything my mom made tasted amazing!  50% of what I make tastes okay…. my damn if I don’t have fun!

After adding all the ingredients to the bowl, I attempted my favorite step in any baking recipe: creaming ingredients together without a fucking stand mixer!  The only other thing that I may get from this is killer arms!

Look at this lumpy shit!  A fork is not a stand mixer!

Maggie’s favorite part of any recipe is cracking the eggs and adding them to the batter.  I’ve shown her how to do this at least 20 times, she’s totally capable.  She goes to a fucking Montessori school, they’re cracking eggs by the time they’re 2!

What I forgot from the equation is that she’s still 50% me:

I wish I had caught this on video because it was seriously hilarious.  She tapped the egg like a pro, she broke it open like I taught her, then the egg yolk touched her hand and she threw the whole damn thing into the batter.  She’s a Heldberg at heart. 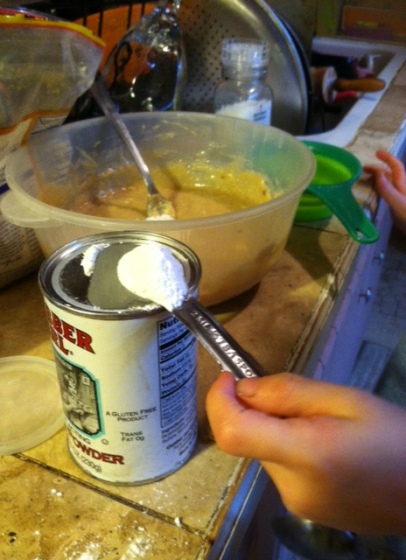 The other magical thing we Heldberg’s  fail at: measuring.  That’s Maggie’s attempt at  1/2 tsp of baking powder.  She just fucking went for it!  I helped her level it off before putting it in – I don’t know what happens when you add too much baking powder but I imagine it’s not good!

With a little more willy-nilly measuring and some half assed fork mixing, we had what could be considered cookie dough.  I lobbed them onto the baking sheet (that I remembered to line with parchment paper because I learn from past mistakes!) and popped them in the oven!

But according to Ryan they tasted pretty good! He did describe them as scone-like though… too many incorrectly measured ingredients?!